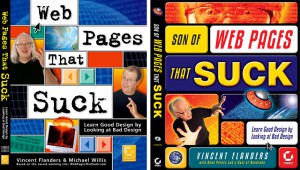 When I first got started designing a website (it was just for me to get more repeat and referral leads when I was in security alarm sales), I found a book titled "Web Pages that Suck!".  The title took me aback so I read a bit further to the tag line of "Learn good web design by looking at bad web design" which made the book much more palatable.  It was an excellent resource which showed what you should not do when designing a website.  The concept must be popular because they are still around after 18 years.  So when I decided to write a blog post about video testimonials it seemed like the logical way to approach the subject.

Everyone knows that customer testimonials are a hugely powerful tool in your marketing arsenal.  If you are not asking for testimonials from each and every one of your clients (a mistake we have been guilty of as well at Your-Web-Guys) then you are missing out on easy money.  However, text is not very powerful... after all, who really wrote that raving review of your product or service that you have on your website, right?  Enter the video testimonial.  You know the person said it, you watched them do so, but video creates a whole new set of problems for the small business owner who does not have the money to hire a videographer to do this highly beneficial task.

We went through and found several examples of very bad video testimonials and a few really good ones too.  If one of these is yours, please don't be angry.  We are not trying to make fun of you or your efforts, but help everyone learn from your mistakes.  As Winston Churchill once said:

All men make mistakes, but only wise men learn from their mistakes.

How it sucks: Do you believe it?

This video at first glance is pretty good.  But at the end of the day, do you believe it?  To me it seemed a bit contrived, like the manager shoved a camera in the customers' face and said "how great is this dealership?".  The answers are forced and the video ultimately fails in my humble opinion

How it sucks: Can you hear it?

The biggest problem with this video is the audio.  One of the biggest sins you can commit when making this type of video is to have folks not be able to understand what is being said.  The quality, production values, and even camera angle are not big issues when it comes to social videos.  In fact bad production values often add a certain level of real-ness to a video which makes it more believable.  But bad audio can destroy any benefit the video might bring.  Shooting a testimonial on your smart phone is fine... just make sure you have a good microphone to get the voice that is speaking great things about your company.

How it sucks: Who is that other chick?

This video is actually quite good... except for when some other woman starts talking instead of the one we were first introduced to.  It is jarring and takes the viewer out of the moment.  As soon as she comes on and starts talking I stop listening because I am trying to figure out who she is... even after the text telling us who she is appears, it is hard to get back into it.  If you have two people from the same company giving you a testimonial, make two videos.

Everything about this video is great... if it were 7 different videos.  I am really quite astounded that it has gotten over 2000 views over 3 years.  As soon as I see a run time of over seven and a half minutes, I click the back button pretty quickly.  Just like in the previous critique, they should have cut it into several different testimonials.  Never post a video that is over 90 seconds long unless there is such good content that someone is willing to stick around.  Besides, the more videos you have the more chances you get of being found in search results.  Don't forget that YouTube is a social media platform.  You need new content being added all the time.

How it sucks: Where do I start?

Ironically some of the worst video testimonials we found were done by web design studios.  I am not sure why that is, but it really was disheartening to see where our industry stands in this department.  This video was one of the worst.  Poor (and not in a good way) production values, bad audio, totally contrived content, etc... the only good thing about this one is that it is not too long.

How it sucks: Were they trying out new software?

Ultimately this video would not have made our list if it weren't for one thing... the weird and completely distracting use of video filters.  The frame distorts and even starts to wash out at one point when they were playing with the saturation.  Just keep it simple - the message is the content, not how easy it was for you to add cool (in your mind) effects to it in post production.

How it sucks: Do I suddenly need glasses?

Okay, so I said earlier that it wasnt a big deal to shoot a video testimonial on your smart phone and it is true.  However, you might want to make sure that the resolution on the video is high enough that you can actually see the person that is talking.  I will give them the benefit of the doubt though, it was posted in 2008 so it might have been a Razor phone at its highest resolution.

So we have looked at several of the bad ones we found and discussed what was bad about them.  Now lets look at some good ones and make some comparisons.

How it doesn't suck: It is real

Yes, this is a negative testimonial, but you believe it dont you?  There is not a doubt in your mind that this was posted by a real person who really bought the product and really does not like it one little bit.  But look, really bad production values, really bad lighting, no fancy graphics and the audio is a bit on the hard to hear side.  It is even too long by the 90 second standard.  However, of all the videos you have seen up till now, this one will stick with you the longest.  That is why it has over 167k views in just over 3 years while none of the others got more than 500 (except for the really REALLY long one).

How it doesn't suck: Just watch it!

Leave it to Google (which owns YouTube) to really understand how to effectively use testimonials in video.  The production values are great and while this can sometimes backfire, it does not do so here because they arent so good as to be a distraction or a deal breaker.  The music is perfectly upbeat and fun which conveys the feeling they were looking for.  But most importantly, the dialog is not contrived... at all.  These people are very much evangelizing about the product/service which they obviously love.

So what does that mean to my videos... how can I make good ones?

The lesson to take away from all this is to remember that one thing is more important than any other.  Real dialog is the most important thing for an effective video testimonial.  But, how do you get that real dialog like in the google video or even in the one about sleep number beds being so bad?  The answer is to stop trying so hard.  If you want to make a believable video with honest information, don't give the folks you are recording any direction.  Just let them speak.  If they need a bit of a push, ask them to tell you about their business.  In the process of describing what they do, they will naturally bring it around to how you helped them do that.  It will be natural, believable, and valuable to prospective new customers.  Google didnt send a film crew to those businesses and shove a mic in the owners faces and asked "how great is google's new business view for maps?"  Odds are they came in and said "tell us about your business" then let the film roll.  You can see it in snippets where they owners are talking about their uniqueness throughout.  The only place you really need to do much of anything with this technique is to spend some time editing the video for content and length.