Googlebot and Pinocchio: an SEO parallel 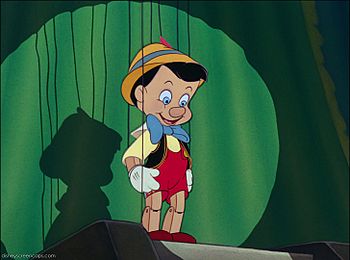 Both Googlebot and Pinocchio want to be real people.
(Photo credit: Wikipedia)

We all know the story... something man made wants to be alive.  Johnny 5 is alive!  Pinocchio wants to be a real boy.  Buzz Lightyear thought he was a real space ranger.  The android Data, from Star Trek, wants to be in love.  Rudolph couldn't play any reindeer games... and on and on.

Okay, maybe not that last one, but you get the idea.  My point is that same list should include Googlebot.  Googlebot is Google's web crawling robot (sometimes also called a "spider"). Crawling is the process by which Googlebot discovers new and updated pages to be added to the Google index.  More info on Googlebot here.

What does that have to do with Pinocchio or the robot from the 80's classic Short Circuit, Johnny 5?  The are all trying to be human.

Googlebot is trying to be human too

The ultimate goal of the Google algorithm is to present search results in the same way someone would refer you to information you when standing next to you.  You ask "Restaurants near me" to Google and in a perfect world (according to Google at least) it would reply with a list of highly rated eating establishments close to your current location.  This emulates the same way you might ask a friend "any good places to eat around here?" and they would respond with a few of the restaurants they like which are nearby.  That's the goal, but how does Google get from basically counting the number of times a keyword is used on a page (the first algo a long time ago was pretty simple) to something that can use an opinion and artificial intelligence (which it does not do very well at the moment)?

Creepy right?  Not really.  It's not like there is some machine with glowing red eyes sitting in the middle of a giant room full of monitor screens with thousands of wires running in and out of it watching and learning... and plotting!?  That is just Hollywood trying to make a visualization of something much more straight forward.  Googlebot is simply a set of code instructions that runs 24/7/365 in the cloud.  It is not an actual robot... yet (Skynet/Ultron/Darpanet anyone?).

But how does it learn by watching humans?

It makes note of when and how often different pieces of content are interacted with by people.  Lets say you click the like button on this article (seriously though, please do).  Googlebot sees that and thinks "wow, another human thought this was  good enough to click like so it must be good information".  If you were to make a comment on it, Googlebot would think that is an even better indication that the content is important because another human took the time to type a comment.  Then if someone else were to make another comment then it is even more important and so on.  The more interaction, the more impressive it is to Googlebot.

So, what does all that mean to you and your Search Engine Optimization efforts?

Start interacting.  Not only does it benefit the content which you are interacting with, it also helps your "importance" to Googlebot.  LinkedIn has the InFluencer score.  Facebook, Twitter and, most importantly, Google all have something similar which keeps track of how often you interact and are interacted with online.  So interact! Comment, like, write, contribute and in general put yourself out there.  The more you do, the more important you become and therefore the more important your content becomes too.  A rising tide floats all boats.  When your personal importance increases, everything associated with you gets more important at the same time.  That means that your comments, likes, blog posts, and your website will start seeing more traffic.

Here is a great way to start... make a comment below and tell me what you think of this article.  It will help me and you too.  Plus, I would love to hear your opinions on the subject and if you agree or disagree.